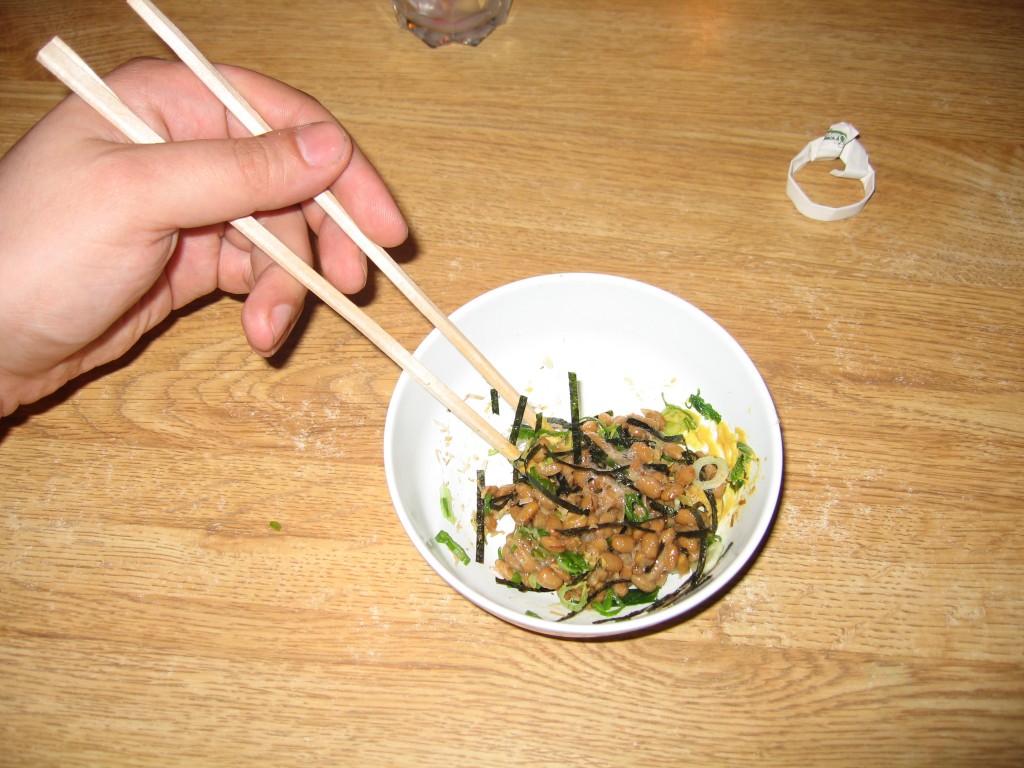 When I visited Japan a few years ago, one of my favorite food experiences was a little hole in the wall bar in rural Japan near Osaka. The little dishes of interesting fare really hit the spot after a night of drinking and the hot shochu with umeboshi helped keep my buzz going and my body warm. When I walked into Suehiro last Sunday night at midnight, a quick glance at the specials board let me know that this was my kind of place. Just a warning, there is a 90% chance that you won't like some of the things I ate at Suehiro, but if you are adventurous you should give them a try, if not there is still plenty of tame and tasty items to be had.

The first special item I ordered was mountain yam with tuna and seaweed. Mountain yam is nothing like the yellow or orange yam we are used to eating in the states, but instead is a white slimy mucous-like substance, in this case about a half cup of it, topped with tuna sashimi slices and shredded seaweed. I had eaten mountain yam on many occasions before, but never so much at once, but the friendly waitress helpfully suggested I add soy sauce to the mix, which made it much more palatable.

Next I had my favorite Japanese niche food, natto. If you have never had of or heard of natto before, you should definitely try it at least once, just to say you did. Natto is fermented soy beans, which are even slimier than mountain yam, but intensely bitter and pungent. There are also extremely healthy, packed with amino acids and vitamins. Natto is served with green onions and spicy mustard. FYI only about half the people in Japan can even stand natto.

The third dish I ordered (keep in mind these are relatively small dishes ordered from the alacarte menu or the special menu) was sardines with roe, which were basically small fish filled with their eggs. The fish were broiled and had a wonderful salty rich fishy flavor.

The fourth dish was fried baby squid rings AKA calamari, and was the tamest of the four dishes I had. I washed it all down with some cold sake followed by shochu with calpico. I really wanted hot shochu with umeboshi, but they didn't have any pickled plums.

Penelope had the fried tofu, which was two huge blocks of deliciously fried tofu coated with a sweet batter and a wonderful sauce. We both really enjoyed her selection, and I really enjoyed mine. The atmosphere was casual and fun and they were packed at midnight on a Sunday.

[Photos can be found here]